The World Mission Society Church of God believes that their founder Ahn Sahng Hong, was the second coming of Jesus Christ.  Unfortunately for their claim, Ahn Sahng Hong only believed he was the Prophet Elijah.  That’s what he claimed in his writings and that’s what he put on his tombstone.

Ahn Sahng Hong’s Tombstone Claims He Was the Prophet Elijah, Not Jesus 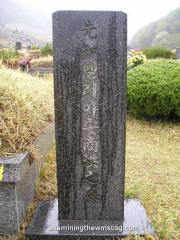 This is Ahn Sahng Hong’s grave site in Gyeongsang, South Korea.
The Korean letters on the tombstone are “선지 엘리야 안상홍 지 묘” which reads:

Just to be sure, on the back of the tombstone it reads he lived Dec 1, 1918 – Feb 24, 1985, and it also lists his children’s names, which is curious since the WMSCOG denies he was ever married to anyone other than Zahng Gil Jah.  Just for the record, there are other folks buried in this same cemetery who claimed they were God. You can see more pictures and read more about them in this excellent article.

Ahn Sahng Hong’s Writings Claim He Was the Prophet Elijah, Not Jesus

In Ahn Sahng Hong’s book entitled, “The Mystery Of God And The Spring Of The Water Of Life” he implies that he is the prophet Elijah.  Ahn Sahng Hong writes in the preface:

This book is about the last secrets of God, which have been hidden only for the last remnant, as it is written in Malachi 4:5-6–the last chapter of the Old Testament: ‘See I will send you the prophet Elijah’…As it was at the time of John the Baptist and Jesus’ first coming, so will it be in the last days.

I guess that makes sense since his tombstone says the same thing.

Elijah and Christ Are Not the Same Person

In the Bible, Christ is not considered to be Elijah.  Jesus tells use this quite clearly in Luke Chapter 9.

Once when Jesus was praying in private and his disciples were with him, he asked them, “Who do the crowds say I am?” They replied, “Some say John the Baptist; others say Elijah; and still others, that one of the prophets of long ago has come back to life.” “But what about you?” he asked. “Who do you say I am?” Peter answered, “God’s Messiah.” Jesus strictly warned them not to tell this to anyone.

Therefore, if Ahn Sahng Hong considered himself a prophet of any kind, then he can not be Christ as the WMSCOG claims.

Who Does the WMSCOG Consider to be Elijah?

When I was a member of the WMSCOG, I asked why Ahn Sahng Hong never claimed to be Jesus in his writings.  I was told that Ahn Sahng Hong came as Jesus “in secret”, and he revealed to his disciples that he was Jesus prior to his death.  Turns out he actually claimed to be the Prophet Elijah, and not Jesus.

When I was a member, a deaconess told me that “mother says that general pastor [Joo Cheol Kim] is the spiritual prophet Elijah”.  There is an obvious discrepancy here.  Why did Ahn Sahng Hong consider himself to be Elijah, and yet according to the WMSCOG deaconess, Joo Cheol Kim is Elijah?  How many times is Elijah prophesied to appear?

Was Elijah Prophesied to Appear a Third Time?

Elijah was a prophet that challenged Baal, the Canaanite god responsible for rain, thunder, lightning, and dew (1Kings 18 & 19).  Elijah’s return is prophesied in the book of Malachi.

See, I will send the prophet Elijah to you before that great and dreadful day of the LORD comes.

This prophecy finds it’s fulfillment in the New Testament when Jesus says:

For all the Prophets and the Law prophesied until John. And if you are willing to accept it, he is the Elijah who was to come. Whoever has ears, let them hear.

and again in the book of Matthew we read:

Jesus replied, “To be sure, Elijah comes and will restore all things. But I tell you, Elijah has already come, and they did not recognize him, but have done to him everything they wished. In the same way the Son of Man is going to suffer at their hands.” Then the disciples understood that he was talking to them about John the Baptist.

The prophecy of Elijah’s return was already fulfilled by John the Baptist when Jesus Christ was alive.  There is no Biblical reference to support the notion that Elijah would return a third time.