Who is Ahn Sahng Hong? 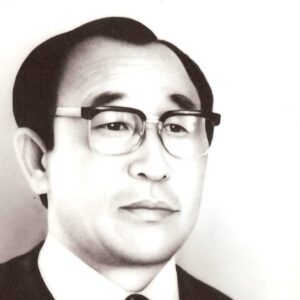 Though Ahn Sahng Hong established his own church in 1964, he maintained some of the SDA’s core beliefs and practices.

Sun Myung Moon, head of the Unification Church, wrote about some unique beliefs that Ahn Sahng Hong would later write about in his books.  The guiding text in the Unification Church is the “Divine Principle.”  shared some similar beliefs with Reverend Moon Sun Myung regarding the appearance of Second Coming Christ.  Moon wrote that the Second Advent:

The first edition of the “Divine Principle” is said to have been written and published by Sun Myung Moon in 1945.  Ahn Sahng Hong did not denounce his Buddhist religion until 1948 and did not make the same claims about the Second Coming of Jesus until 1967 in the book titled “The Mystery and the Spring of the Water of Life.” 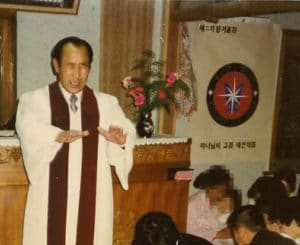 The Second Coming of Jesus Will Happen in 40 Years

Ahn Sahng Hong wrote about the Second Coming of Jesus being imminent in his book “The Mystery and the Spring of the Water of Life” (1967).  It is clear from his writing that Ahn Sahng Hong believed he was living in the time of the “last one generation” and that the Last Church would be “ended up within 40 years.”  These references to the Second Coming and the last one generation would later be removed from future editions of the text by the WMSCOG.

There is No God the Mother

In 1978 a member of Ahn Sahng Hong’s church named Um Soo In claimed to be the “mother god”, “heavenly Jerusalem” and “comforter” sent down from heaven.  After expelling Um Soo In and her group of followers from his church, Ahn Sahng Hong wrote a book titled “Problems with the New Jerusalem, the Bride and Women’s Veils” in 1980 that not only denounced the idea of a mother god, but claimed that it was a result of Um Soo In’s “misguided delusion” (Chapter 7).  Ahn Sahng Hong also declared Um Soo In, her beliefs and her followers, “sinful”.

In the same year, Ahn Sahng Hong predicted that the world would end in 2012 in his book titled “The Bridegroom Was A Long Time In Coming, And They All Fell Asleep.”  The full text of the book is available on the NCPCOG website but is not available at any WMSCOG locations for members to access.  The WMSCOG denies ever believing or teaching that the world would end in 2012 despite evidence to the contrary.

What happened to Ahn Sahng Hong’s Church after he died?

The NCPCOG believes that Ahn Sahng Hong was the prophet Elijah, not the Second Coming of Jesus, as is written on Ahn Sahng Hong’s tombstone.  The NCPCOG does not believe in a “mother god.”

In addition to the aforementioned end of the world prophecies made by Ahn Sahng Hong in his books, on July 14th, 2005 the Northern Seoul Regional Court chronicled the failed doomsday predictions and the events that took place after Ahn Sahng Hong’s death in a written decision in the WMSCOG vs. Ji Won Tak case.  It is documented by the Court that the WMSCOG preached that the world would end in 1988, 1999 and 2012 (pages 4-5).

WMSCOG members have been taught that Ahn Sahng Hong and Zhang Gil Jah are “god the father” and “god the mother” despite Ahn Sahng Hong never claiming to be God.  The WMSCOG claims that Ahn Sahng Hong and Zhang Gil Jah are the “spirit and the bride” in Revelation 22:17 and show the members a picture of them that suggests that they were married.  Over the last decade, it has been revealed to the WMSCOG members and the public, at least in the United States, that Ahn Sahng Hong was married and had four children.  Ahn Sahng Hong never divorced his wife and in 2008 when his wife died, she was buried next to him. Both of their names are written on a shared tombstone, with their children’s names written on the back.  This unveiling caused a lot of controversy in the WMSCOG.  The WMSCOG’s position on the issue became that the “physical” does not matter and members should focus on the “spiritual.”

What Does The World Mission Society Church of God Tell Its Members About Ahn Sahng Hong’s Life?

It seems as though the way that the WMSCOG describes Ahn Sahng Hong’s life to its members and what the actual evidence shows, just does not add up.  Let’s take a look. 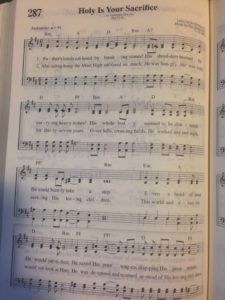 In the WMSCOG’s New Song Book, a song titled “Holy Is Your Sacrifice” claims that [AhnSahngHong],

“His whole body seemed to be shattered;  He could barely take a step.”

“Father Ahnsahnghong climbed rough hills and mounts; no one knew He suffered all alone, searching for us. Every step, with pain, His whole body ached as He stumbled over stone, and He was feeble with weary legs. How much in pain Father Ahnsahnghong’s feet were.”

The lyrics of “Holy Is Your Sacrifice” further claim that [Ahn Sahng Hong],

“Even a bowl of soup he would sacrifice; He saved his poor wages, skipping his poor meals…He was hungry, He was cold, for thirty seven years.”

The same presumed member blog (see screenshot above) similarly goes on to say:

“Mountain water was His only meal…Even His food He spared for the sake of the children and we steam Him not.”[sic]

Yet, Ahn Sahng Hong is seen here (left) eating a meal with his wife, children and other members of his church that clearly includes plenty of solid food.  Ahn Sahng Hong is also photographed standing behind his 3 tier birthday cake (right). 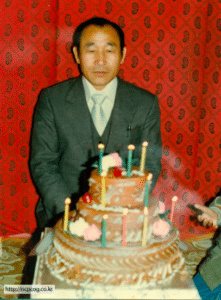 Clearly, there are a number of inconsistencies between the WMSCOG’s portrayal of AhnSahngHong’s life and the evidence that we have available.  Yet, another contradiction stands out. WMSCOG General Pastor Joo Cheol Kim’s view on family and love being “temptations of Satan” does not reflect Ahn Sahng Hong’s actions with respect to the same issues.  Clearly Ahn Sahng Hong did not believe that family and love were temptations of the satan since he married and decided to have four children.  It would appear that the WMSCOG believes that their own leader and supposed “god”, Ahn Sahng Hong, was tempted and succumbed to Satan’s tempations.  It also is apparent that a marriage and four children did not interfere with Ahn Sahng Hong’s important work of establishing a new church, “restoring the Passover”, and preaching to the public.