This article is dedicated to my friends who were taught by the WMSCOG that Ahn Sahng-Hong did not have any children… only to find out later that he did. 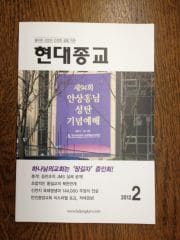 I have friends who were in the World Mission Society Church Of God for a long time.  Many were told that the supposed founder Ahn Sahng-Hong had no family.  As it turns out, he did.

Not only are Ahn’s childrens names purportedly written on his tombstone, but the February 2012 issue of Modern Religion Monthly magazine in South Korea contains an interview with Ahn Sahng-Hong’s eldest son Ahn Kwang-Sup.  (He uses a nick-name as his first name).

If you would like to get in touch with Ahn Kwang-Sup, he is still a member of the New Covenant Passover Church of God (NCPCOG) today, the church that Ahn Sahng-Hong founded.  (Click here to see a picture of Ahnsahnghong with his son on right, or here for more pics).

Ahn Kwang-Sup confirms in the interview that his father, Ahn Sahng-Hong, did not believe in a mother god.  Here are the highlights from the interview:

The interview has been re-published below by permission from Modern Religion Monthly magazine in both PDF and Text format for your reading enjoyment.  The language and opinions adopted in the article do not necessarily represent the opinions or views of this site or its ownership.

Pictures of the Magazine

Here are shots of a copy of the magazine

28_   The Church of God is Zhang Gil-Jah’s Congregation!

The Church of God is Zhang Gil-Ja’s Congregation!

Is Zhang Gil-Ja the wife of Ahn Sahng-Hong?

After Ahn’s death, the congregation went two separate ways: the God of Church that believes in Zhang Gil-Ja as the Heavenly Mother and the New Covenant Church that adheres to the traditional doctrine of Ahn. The Church of God proclaimed that Zhang was the Spiritual Mother, on the grounds of a wedding photo of Ahn and Zhang. According to the testimony we received from a victim based in America, the Church of God in the U.S. currently presents Zhang as the first wife of Ahn; a claim that Ahn’s own son, Ahn Kwang-Sup, does not accept. Ahn made it clear that Zhang was not his father’s wife, citing Ahn’s Detailed Family Census Register as evidence. On the Register, Hwang Won-Soon is recorded as Ahn’s wife and it says that she “reported the marriage with Ahn Sahng-Hong on the 5th of April 1958”.  The name Zhang Gil-Ja is not found anywhere in the register. Ahn Kwang-Sup stressed that Zhang could not have been the first wife and he did not verify Zhang’s wedding photo, saying that he had never seen it before.

Is Zhang Gil-Ja the Heavenly Mother?

The Church of God emphasizes that the images of man and woman are contained within the image of God and that Eve symbolizes the bride of the Second Coming of the Christ. It claims that the ‘Heavenly Jerusalem’ mentioned in the Revelation of John implies the bride and thus points to Zhang Gil-Ja, since she is the Heavenly bride chosen by Ahn Sahng-Hong. The claim is dismissed by Ahn Kwang-Sup as “a load of nonsense”.  “The Heavenly Mother is not part of Ahn Sahng-Hong’s teachings”, he said. When Ahn was alive, “a person called Um Soo-In once claimed that she was the bride and Ahn Sahng-Hong rebuked the claim in writing”, he added. According to Ahn Kwang-Sup, pastor Ahn had never taught about the Heavenly Mother and had clearly written that “the bride means the New Heavenly Jerusalem as recorded in the Revelation of John 21:9-10 and the new Jerusalem translates into 144,000 members of the congregation”.

Is Kim Joo-Cheol the successor of Ahn Sahng-Hong?

The Church of God claims that Kim Joo-Cheol – the leader of the Church of God – is the successor of Ahn, because Ahn dressed Kim in full ceremonial uniform and took a photo of Kim. The New Covenant Church suspects that the photo may have been forged. Even if the photo was genuine, the Church maintains that Kim cannot be accepted as the successor on the basis of a single photo. Ahn Kwang-Sup criticized Kim’s claim, saying that “Kim proclaims to be Ahn’s successor but that is just his opinion”. “It is not known whether Kim put on the uniform himself at the time. Pastor Ahn had never publically dressed Kim in a formal ceremony”, he said curtly. As far as he is concerned, Kim has never been formally appointed as the successor by Ahn.

Is Ahn Sahng-Hong the Saviour?

The service performed at the New Covenant Church is not much different from that of the mainstream churches. The parishioners pray in the name of ‘Jesus Christ’ and recite the Lord’s Prayer. They sing unmodified mainstream hymns. Like the Seventh-day Adventists, they observe Saturday as the Sabbath day. “The New Covenant Church worships God in the same way we did when pastor Ahn was alive’, Ahn Kwang-Sup said.  He pointed out that the Church of God changed the service format to suit its own views. “Although the Church of God prays in the name of pastor Ahn Sahng-Hong, Ahn was not the saviour of people, he was just someone who found the truth people had lost”, he stated. “The New Covenant Church believes in Jesus Christ as the Saviour and pastor Ahn himself made it clear that only the work of Jesus could save us”. The Church of God, however, believes in Ahn Sahng-Hong as the Saviour. In its full articles of incorporation, the Church states that “we believe in the truth that we will be saved by the Heavenly Spiritual Father Ahn Sahng-Hong who came to the world, as written in the Bible, and by believing in the Bride of the Heavenly Father, Zhang Gil-Ja”.

25th of December marks the Nativity of Ahn Sahng-Hong?

Church of God criticizes the Christmas day celebrations held by the traditional churches as worshiping the historic Sun God and it celebrates the day to commemorate the nativity of Ahn Sahng-Hong. One member of the Church describes the meaning of the nativity day in his internet blog as follows; ‘since the mainstream churches do not know the exact birth date of Jesus, celebrating Christmas on the 25th of December has no meaning whatsoever. The members of the Church of God know the exact birth date of Ahn Sahng-Hong and celebrate the day accordingly”.  Is Ahn Sahng-Hong’s birthday the 25th of December, as this believer claims? In the Detailed Family Census Register, Ahn’s citizen ID is recorded as “180113-OOOOOOO’. He was born on the ’13th of Jan 1918′ in Myungduk-ri Gyenam myun, Jangsoo-gun, Jullabukdo.

In his book called [The Mystery of God and the Spring of the Water of Life], pastor Ahn concludes that the number of people saved will be no more than 144,000. He also claims that “2012 will be the end of the world” in [While the Bridegroom Tarries, All the People Fall Asleep?]. In a nutshell, the world will end in 2012 and only 144,000 people will be saved.  The Church of God supports this prediction and is secretly spreading the message. The number of believers in the Church, however, is currently over 144,000. The Church claims that the number reached 1.45 million according to its own survey, which would mean that less than 10% of the congregation will be saved.  Criticizing such a claim, Ahn Kwang-Sup said, “When we are talking of the number 144,000, it is fraudulent to boast the figure that goes beyond a million. The Church of God essentially deviates from the foundation laid by pastor Ahn”.  “Pastor Ahn talks about the last day of the world in 2012 but he also said that we need to fill the number 144,000. So we need to fulfil this number first”, he added.