Does Zhang Gil Jah Represent The Heifer In Numbers 19? 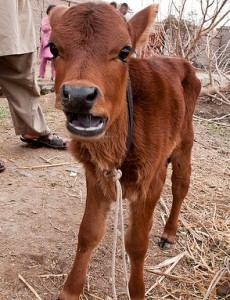 In a Bible study that I attended at the World Mission Society Church of God called “Clean and Unclean Animals”, I was taught that ZhangGilJah represents the heifer being sacrificed in Numbers 19.  After discovering that the WMSCOG uses contextomy to make many of their arguments, I am compelled to delve further into claims made by the group.  Can a solid connection be made between the ceremonial sacrifice of a red heifer and ZhangGilJah?

Why Does The WMSCOG Believe That The Red Heifer In Numbers 19 Represents ZhangGilJah?

The WMSCOG missionary that taught this lesson claimed that there was a “spiritual meaning” to the heifer being sacrificed, because the heifer was the only female animal sacrificed by the Israelites during the Old Testament times.  The missionary seemed to have come to this conclusion through an analogous comparison. “Jesus was the Passover Lamb and through His sacrifice we receive the forgiveness of sins.  In the same way “mother” is the red heifer and through her sacrifice we receive the water of life.  Just as the prophecy of the Passover Lamb was fulfilled by Jesus, the prophecy of the heifer had to be fulfilled by ‘mother'”. The missionary cited Numbers 9:9 to support his connection to the water of life referenced in Revelation 22:17. 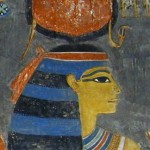 Historical Significance of the Red Heifer

Egyptian pagan worshipers considered heifers (or female cows) sacred and representative of the Egyptian goddess Isis.  It is interesting to note that the headdress that Isis wore consisted of cow’s horns surrounding a red solar disk (see the picture on the left).  Other titles for Isis included “Mother-god”, “Queen of heaven”, “Lady in red”, and “Lady of eternity” among others.  For the Egyptians, Isis represented motherhood, magic and fertility.  Biblical references to the pagan worship of a female deity are also noted. Jeremiah chapter 44 describes the disasters the Lord brings upon the Jews as a result of their  idolatrous worship of the “queen of heaven”.  See also Jeremiah 7:18 where the Lord says:

“The children gather wood, the fathers light the fire, and the women knead the dough and make cakes to offer to the Queen of Heaven. They pour out drink offerings to other gods to arouse my anger.”

It is clear in the Bible, that God was angered by the idolatrous worship of a female goddess considered to be the “queen of heaven”.  Based upon  historical facts and Biblical context, one can conclude that the sacrifice of a red heifer is in direct opposition to the Egyptian pagan belief in a sacred heifer (female cow) which was also representative of their “mother god”.

Was The Prophecy Of The Heifer In Numbers 19 Fulfilled?

The WMSCOG’s interpretation of the heifer being sacrificed in Numbers 19 suggests that in order to fulfill this prophecy, a female version of God or Christ would need to appear in the flesh as Jesus Christ did.  This argument would only be sustainable if Jesus did not fulfill the prophecy with His sacrifice on the cross.  Are there any connections between the sacrifice of the heifer and Jesus’ sacrifice in the New Testament?

Did Jesus Represent The Passover Lamb And The Heifer?

According to Numbers 19:3, it was required that the heifer be sacrificed “outside the camp”.  We can see the fulfillment of this requirement in Hebrews.

12 And so Jesus also suffered outside the city gate to make the people holy through his own blood. 13 Let us, then, go to him outside the camp, bearing the disgrace he bore.  Hebrews 13:12-13

It is noted in Number 19:9 that the purpose of the sacrificial heifer was “for purification from sin”.  Fulfillment of this requirement through the blood of Jesus Christ can also be noted in the above verses.

Numbers 19:2 requires that the heifer chosen by the Israelites be “without defect or blemish”.   Fulfillment of this requirement is also noted in Hebrews.

13 The blood of goats and bulls [male cow] and the ashes of a heifer [female cow] sprinkled on those who are ceremonially unclean sanctify them so that they are outwardly clean. 14 How much more, then, will the blood of Christ, who through the eternal Spirit offered himself unblemished to God, cleanse our consciences from acts that lead to death,[a] so that we may serve the living God! Hebrews 9:13-14

In the above verses, Jesus who was without blemish or defect, fulfilled the requirement of all animal sacrifices, whether male [bulls] or female [heifer],  in Numbers 19:2.  Not only is the sacrifice of the heifer specifically mentioned, but it is understood that the sacrifice of Jesus Christ surpassed the cleansing the Israelites hoped to obtain through animal sacrifices required by the law of the Old Testament.  Therefore, it is clear that no other sacrifice after the sacrifice of  Jesus Christ, is necessary for us to receive cleansing or purification from sin. Further proof of this is seen here:

10 And by that will, we have been made holy through the sacrifice of the body of Jesus Christ once for all. 11 Day after day every priest stands and performs his religious duties; again and again he offers the same sacrifices, which can never take away sins. 12 But when this priest had offered for all time one sacrifice for sins, he sat down at the right hand of God, 13 and since that time he waits for his enemies to be made his footstool. 14 For by one sacrifice he has made perfect forever those who are being made holy.  Hebrews 10:10-14

In the above verses we understand that the animal sacrifices made by priests according to the Old Testament law could “never take away sins”. But Jesus, an eternal priest in the order of Melchizedek (Hebrews 6:20), “by one sacrifice…has made perfect forever those who are being made holy”.  If by Jesus’ sacrifice (“once for all”), we are made holy forever, what need would there be for another Saviour?

But What About The Water Of Life?

In the above verse, Jesus tells us that He is the water “welling up to eternal life”.  Therefore, ZhangGilJah can not represent the water of life.

Did ZhangGilJah Fulfill The Prophecy Of The Sacrificial Heifer In Numbers 19?

Due to the clear connections between the sacrificial heifer and Jesus’ sacrifice I would have to conclude NO.  By Jesus’ sacrifice we receive the purification of sins forever, a claim that could never be made with regards to the ceremonial requirements of the Old Testament law.  Not only did ZhangGilJah NOT fulfill the prophecy of the sacrificial heifer, there was no need for anyone else to do so.

It is abundantly clear by the above historical and Biblical analysis that the World Mission Society Church of God’s lesson on “Clean and Unclean Animals” is severely flawed.  One could only agree with their interpretation if one completely ignores the historical and Biblical context.  So in summary, the WMSCOG argument remains unsupported for the following reasons:

Who Is The Queen Of Heaven According To Ahn Sahng Hong?

Prayer List for the Prayer Week of the Day of Atonement

“Whenever A Woman Makes Assertions In The Church, The Church Will Fall Under…