This article is dedicated to all of those who thought Ahn Sahng-Hong was married to Zahng Gil-Jah, only to learn he was really married to Hwang Won-Soon.

That is why, after Hwang Won-Soon’s death in 2008, she was buried next to Ahn Sahng-Hong, and his original tombstone was replaced with the one below:

Here are some additional photos of the tombstone as well.

The Real Tomb of Jesus
Here is the tomb of Jesus, also known as the Church of the Holy Sepulchre, which is visited by millions of Christians from around the world every year: 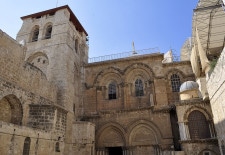 Yet the tomb of Ahn Sahng-Hong, is relegated to a common cemetery, an overgrown grave, and is shared with a woman who is not Zahng Gil-Jah.
Where are the great pilgrimages to Ahn Sahng-Hong’s tomb by followers of the WMSCOG?
If millions of Christians visit the tomb of Jesus every year, why don’t WMSCOG members visit the tomb of Ahn Sahng-Hong?
Perhaps it is because they (at least those that read Korean) would see that “the Prophet Elijah” is written on it and not “the Christ”.  Or perhaps it is because they would see that he is buried beside his real wife, Hwang Won-Soon.
Whatever the reason, I find it hard to believe that a man who

is the Second Coming of Jesus and was “spiritually married” to another woman other than his legal wife.   Put aside for a moment that Ahnsanghong’s end of the world predictions didn’t come true and were removed from his writings, that he said the idea of a “mother god” was delusional, that he completely refutes the same verses that the WMSCOG uses to say that Zhang Gil Jah is “god the mother” and concludes that there is no mother god… At some point you have to stop and ask yourself “how much longer can I ignore what is plain to see”?  That the WMSCOG’s teachings are part of an ever-evolving story that have been invented to fit a set of facts and that whenever another fact emerges, the story must become ever more convoluted in order to fit “the truth” to those new facts

Ahn Sahng Hong Vs. The WMSCOG

Did Ahn Sahng Hong Teach That The Cross Is An Idol?