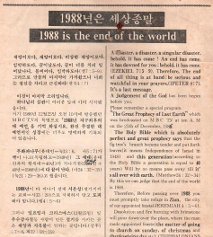 This article is dedicated to a young woman whose brother is caught up in the WMSCOG.  May he and his family soon return to Jesus Christ.

I was surfing the net the other day and I came across this flyer from the Ahn Sahng-Hong Witness Association again.  It had been a while since I wrote anything about it, and I thought it deserved a second look.

From what I understand, the Ahn Sahng-Hong Witness Association was an early name used by Ahn’s church (the man the WMSCOG claims was their founder, a claim they share with the NCPCOG).  While the authenticity of the flyer can not be confirmed, there are a number of factors which lead me to believe it to be authentic:

Tinged with Seventh Day Adventist folklore, the flyer pleads with the reader to flee to “Zion, the city of our appointed feasts“.  In typical SDA and WMSCOG fashion, they can’t help but take a parting shot at established Christianity with overly dramatic language like “you have got decieved“, “ravenous wolves“, “tricks“, and “incredible rumors“.   Sure.  ::yawn::

Don’t forget my favorite line “one who deceives one thing is a man who decieves everything“.  Why can’t those who disagree with you just be wrong?  Why do you have to imply ill will with words like “deceive”?  I guess you have to hype the drama to sell tickets to this movie right?  (Somebody pass the popcorn).

If One Thing Is Wrong, It’s All Wrong

Let’s point that finger back around at you for a moment.  For an organization that claims to be led by the “mother god”, a woman living in Korea named Zhang Gil-Jah, who oh by the way is the Chairperson of the International We Love U Foundation, the last time I checked you had some glaring problems with your claims:

More End of the World Speak

In the end (get it? the end?) I don’t really need flyers to remind me of this. I have friends. I have former members. I have current members. I have years and years of people who all say the same thing. The WMSCOG keeps predicting the end of the world and keeps getting it wrong.

Thanks, but no thanks. I’m sticking with Jesus Christ.

Got something to say?  Comment below or join the discussion in the forum.

Ahn Sahng Hong Predicted the End of the World in 2012